What is Token Burning?

What is Token Burning?

The strategy which permanently elements cryptocurrency coins/tokens from circulation is referred to as token burning.

Burning is generally taken out at regular intervals and quite popular among the cryptocurrency community.  It is an intentional action that is conducted out by coins creators in order to burn or eliminate it from the circulation.

We get many motives to burn tokens. But the move we expect is deflationary. Larger blockchains like Bitcoin and Ethereum do not operate such a mechanism. In order to control the number in circulation and provide ample incentives to investors, burning is necessary for altcoins and smaller tokens.

Token burning is unique to cryptocurrency tokens, usually, fiat/paper currencies are not ‘burned’. Token burning is identical to the notion of share buybacks by publicly-owned corporations, which reduce the amount of stock available. Token burning holds many extraordinary benefits and that for different aspects.

What are the Strategies Behind Token Burning, How Exactly it Works?

Easily formulated concepts. Token burning can be illustrated in various ways. It aims to reduce the number of tokens that are free.

It seems booming as burning tokens integrates well and also it does not provide them in an impractical manner in the future. This process implicates the developers of the project by repurchasing. The number of tokens that are burned will be transferred to inaccessible wallets known as “Eater addresses”. The nodes and anyone can check the token balance and transaction of the “Eater Addresses” on the public blockchain.

Different types of projects have been designed and show variations. After completing ICO (Initial Coin Offering) few will employ a one time burn,  in order to discard any unsold tokens.

Others choose to burn the coins for sometimes that is a fixed time interval or will be variable. The leading cryptocurrency exchange Binance burns the native token Binance Coin (BNB) at quarterly intervals. The tokens which are burned considered a part of the commitment, in order to achieve 100 million BNB tokens burned. The number of coins burns is based on the number of trades that are being fulfilled. 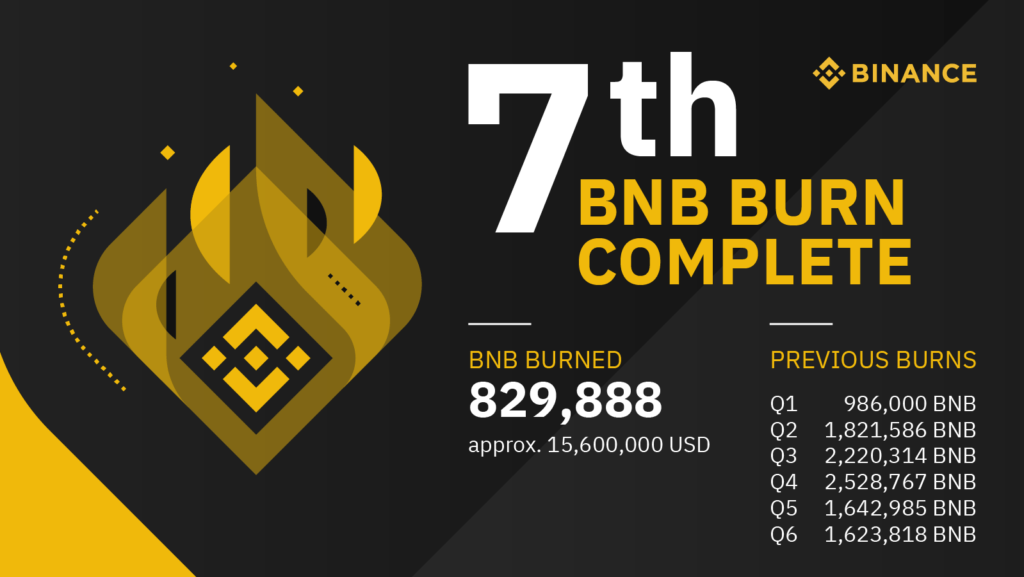 Slowly, Ripple is burning tokens with each transaction. With the help of XRP when parties try to transact, one party gets the opportunity to put a fee comfortably, but these fees do not get returned to a central authority. They burn the fees by delivering it to an eater address immediately as the transaction confirmed.

Stablecoins such as Tether (USDT) will build tokens after the deposition of funds in the reserve. The opposite is also true, USDT tokens will be burned when the funds are withdrawn from the reserve.

Why tokens are burned?

Token burning is a deflationary method. Most of the projects burn tokens to maintain the value and burn the unused supply.

Why burn tokens hold numerous reasons is it adds value, as stated by token holders. And the reason behind it is, it improves the value of each token by decreasing the supply.

If we have a great deal with, we get an opportunity to strengthen the value of each token, which is being held. This also essentials and encourages investors and traders to provide more liquidity. This holds a crucial aspect behind Binance periodic burn, and that’s why many companies will prefer to burn the unsold tokens after the end of ICOs end.

Similarly, token burns can add more error correction. As same was observed for tether. It was noticed that the company accidentally generated $5 billion in USDT and was in need to burn, in order to avoid destabilizing it’s 1:1 peg with United States dollar.

When we talk about security tokens which allows the holders to get earning from projects. They can buy back the shares with the help of corporations. The currencies can be gained back at decent rates, and this results in stimulating the value. If tokens are regained at market price, it would set investors on profit, as they repurchase it back. Some projects prefer tokens as it possesses well security issues and to prevent spamming transactions.

Is the Burning of Tokens be Utilised for Another Purpose?

Yes, we can. Some Projects used token burning to create a more valid unity mechanism for verification and appending purposes for transactions.

PoB (Proof-of-Burn) attempts to address this issue by restricting the number of blocks miners that can verify (and attach new blocks to the blockchain) in order to match with the number of tokens they’ve burned. Essentially, they create virtual mining fields that can grow larger as they burn more tokens.

Burning of tokens can diminish the number of miners at a certain time and also reduce the need for aids. But practically this strategy would provide enormous miners, which can burn a massive volume of tokens at a time.

In order to set a fight, PoB will use a decay rate that eventually decreases the total mining ability of miners whenever it assesses the transaction. PoB identical to proof-of-stake, as both need users to lock existing assets to attain the license of mining.

Proof-of-Burn is not as popular as PoS and PoW. The largest cryptocurrency Bitcoin uses the Proof-of-Work consensus algorithm to maintain the blockchain. Bitcoin PoW is the most powerful and strongest chain among all cryptocurrencies. Proof-of-Work has a major disadvantage of energy consumption.

What About Token Holders, is it Beneficial?

Projects are earning significant advantages over burning their tokens. Security is being provided for Ripple and other projects. As there is no motive behind the charges that are for higher fees. Users can truly confess as the network is used more responsibly.

Token burning gives investors the transpracy and belief. There is always a doubt that whether the team members or developers will dump the market by heavy sell-off of the unsold tokens or unused tokens. When a project burns tokens this doubt is cleared from investors mind.

Most of the projects burn the tokens in the early stages to give the prices a boost and reduce the supply of the token. This will increase the liquidity of the token and grabs attention from new investors.